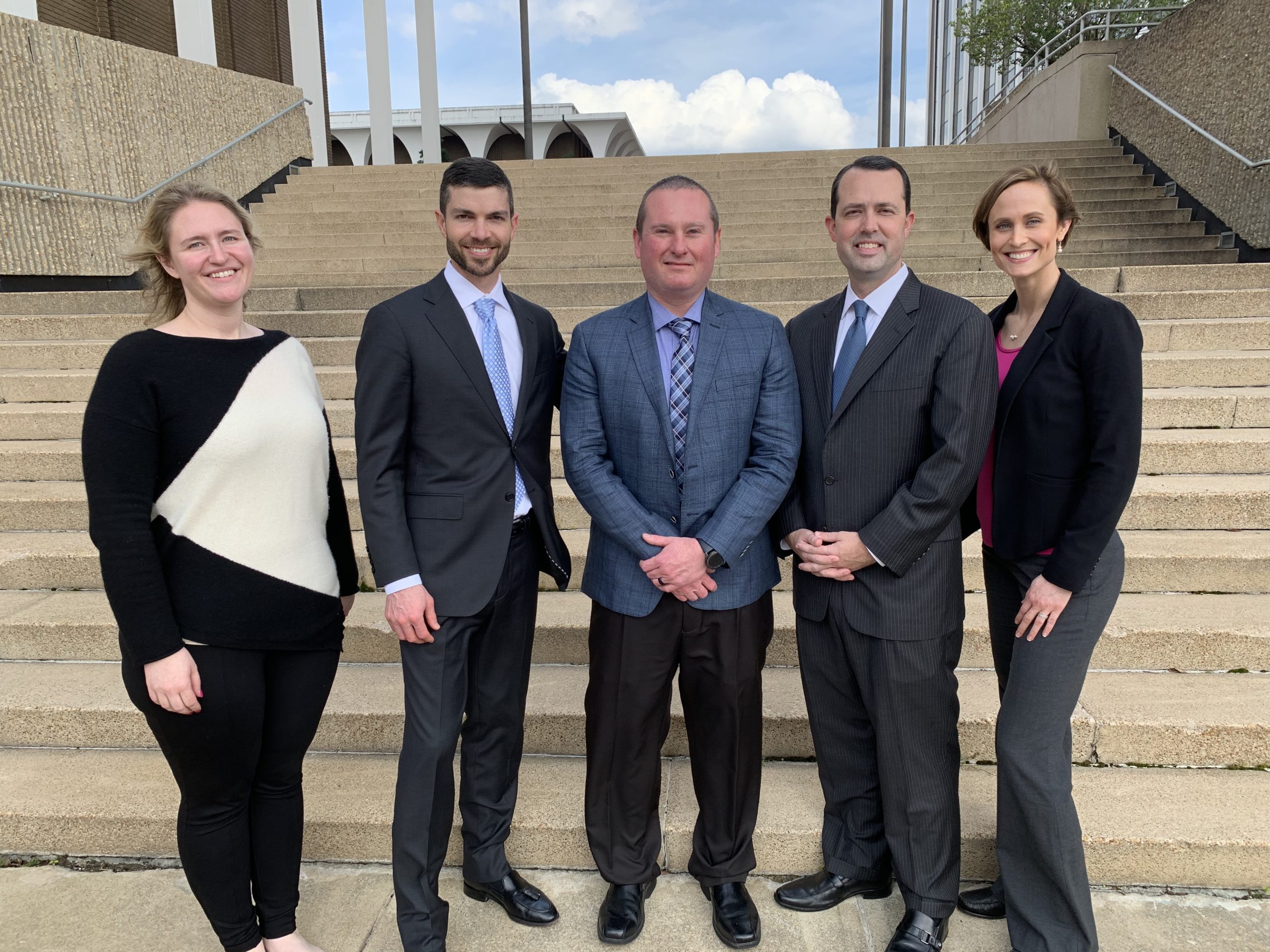 Analysis of a Trial Win: Michael Wells v. The Estate of Kevin Jernigan

$2+ Million for an unexpected U-turn in Muscogee County, GA

Congratulations to Drew Ashby and Chase Swanson for obtaining more than $2 million from a Muscogee County jury on behalf of a man injured by a commercial flatbed truck when a car ahead in traffic made a sudden U-turn. Kastorf law caught up with Drew and Chase to ask about key takeaways from the trial.

This article is part of Kastorf Law’s continuing series on key takeaways from recent trials. Want to ensure your trial is a success? Consider using embedded trial counsel to make sure you win your most important motions. Call Kastorf Law to learn more.

What were some essential facts of this case?

On June 11, 2012, the plaintiff, Michael Wells, was heading north on I-185, when a blue van ahead of Michael abruptly made a U-turn across the median. Michael slowed down, but a heavy-duty commercial flatbed truck behind him didn’t and ran through Michael’s suburban. There were multiple witnesses, include one who took a photo of the blue van and provided a description of the driver. Shortly after the collision, Georgia State Police found a man who matched the description of the driver. He identified himself as Kevin Jernigan, but he denied involvement, and with no van around, they let him go. However, several hours later, the van in question was found behind an abandoned gas station, and the tags on the van, though registered to a different vehicle, were also registered to Kevin Jernigan.

In 2016, the plaintiff settled the case against the truck driver and his employer. The trial continued when the plaintiff brought suit in Muscogee County against the estate of Kevin Jernigan, after finding he was recently deceased. You can read a bit more about the facts of the case from the Daily Report’s coverage.

According to Chase, “I think we really wrapped up liability when Drew cross-examined the truck driver who the defense actually called live. He was just a good ole blue collar guy who had no idea the defense was calling him live to blame him for causing the accident. Drew’s examination was great – he had the jury feeling sorry for the truck driver. On damages, our witnesses were pretty good for the most part, but I thought Michael’s direct was so honest and heartfelt it really sealed the deal.”

Kastorf Law has seen Drew in trial, co-counseling with him on a complex products liability action, and agree one of his best skills is humanizing a witness with his down-to-earth examination. If you’re trying to figure out how to soften a witness before the jury, definitely call Drew.

What was one thing you learned during this trial that you intend to put into practice at future trials?

Drew explained, “I’m becoming more of a fan of having prepared re-direct questions. Sometimes, there are things we just HAVE to spend time on to rehabilitate a witness, but it really sank in for me during this trial, that trying to go back through and re-direct a witness on every little point the defense made has two negative consequences: 1) sometimes the answers to your questions aren’t any better, or can be even worse, than the answers the witness gave to opposing counsel, and 2) by spending even 5 minutes on re-direct, you just give opposing counsel additional time to go back through and identify questions they meant to ask or give them the opportunity to reinforce material which they get to say again since you asked about it again”.

Who was your opposing counsel, and what was the most effective thing they did?

The opposing counsel was Marc Bardack and Andy Treese, “Marc was especially well prepared for the doctor’s depositions.  I thought he did a nice job to fairly succinctly cross the doctors on things that could interrupt causation. He also did a great job presenting himself as a reasonable person, with a reasonable position. Verdicts are often driven up by opposing counsel taking an offensive position, and doing so in an offensive way. Marc and Andy were not only pleasant, but always seemed reasonable in front of the jury.”

According to Chase, “Probably the fact that despite having undergone 6 different neck and back surgeries, Michael could walk into a courtroom with his suit on and generally look okay. We dealt with it in a couple of ways. First, Michael was not present for much of the trial. He was present at the beginning for jury selection, then at the end of our case in chief for his testimony, then on Thursday for closings. We intentionally kept the jury from seeing him so they, even subconsciously, would have less of an opportunity to judge him for seeming okay. Second, we asked every single damage witness how good Michael was at letting others know how much pain he was in and what subtle things they picked up on that let them know he is not the same guy.”

Chase’s strategy ties into a broader piece of advice: it is often easier to prove extent of injury through a friend or relative than through plaintiffs themselves, especially if your client is stoic. Especially in cases where liability is an easy call, you should often think of your client’s spouse, and not your client, as your star witness.

What was one mistake you made?

Chase modestly claims he “made plenty,” (the results speak otherwise), but pointed out that “one that frustrated the most was asking too many questions from one of the fact witnesses at a video deposition about a week before trial. I had a great direct exam, but when she gave some answers during cross I didn’t like I tried to do too much to re-direct her. Not only did she end up saying even more things I didn’t like, but it gave the defense additional time to raise more questions for her too.”

Chase correctly notes that ” I think it is something we all have a tendency to do, so the more times we screw it up, the more likely we are NOT to continue in the future (at least that’s what I’m telling myself).” Kastorf Law would add that particularly talented trial attorneys are especially likely to fall victim to this mistake, because they are such talented questioners they get overambitious with what can be done on cross. There are few Perry Mason moments in real trial; be satisfied if you minimize damage on cross, and win your case on direct.

Describe a key contested evidentiary ruling during your case.

Chase explains that “OneBeacon filed a motion in limine seeking to keep out our client’s medical expenses. The argument was that because his bills were paid in large part by workers’ comp, and because the OneBeacon policy did not provide coverage for bills paid by WC, then they were not relevant.  Fortunately the judge ruled in our favor – Michael had almost $1M in bills alone.” Kastorf Law regularly briefs the admissibility and sufficiency of medical records (for example, Kurt Kastorf recently won an appeal in the Georgia Court of Appeals on the relevance and sufficiency of medical evidence) and can help draft and argue your motions in limine.

Drew notes that Chase “was able to get the judge to rightfully strike a scene witness’s lay opinion testimony that the flatbed truck ‘had enough time to stop, but didn’t do so,’ arguing that things such as distance and speed were clearly fair game, but getting into braking power and friction coefficients was not.” Georgia trial attorneys should be ready to go with lay witness objections under O.C.G.A. § 24-7-701, especially when the defense is trying to save money by not calling experts. As Drew explains, “[s]ince the defense’s strategy was to try the case as cheaply as possible and not bring experts, they were counting on this evidence to support their defense (i.e., that the truck could have stopped if he was paying attention). Instead, that testimony was kept out and the defense was left with only lawyer argument on the issue.”

What was the most unexpected moment at trial?

“That has to be when Michael, in describing some of the photos we had of his vehicle, accidentally said one of the pictures was taken at the tow yard “to give to the insurance adjuster” so the county could get paid for the vehicle.  Motion for Mistrial.  Judge denied.  Phewwww…” said Chase. Drew adds “He then went on to unexpectedly give testimony indicating he had health insurance but, unsurprisingly, the defense didn’t raise a peep about that one and we moved right through it as if it didn’t happen.”

We wish this moment was a little less expected. Kastorf Law has had multiple trials where a reference to insurance sneaks out. Take it as a reminder to prep your witness and prep them again. Most courts will deny the first mistrial motion, but your heart rate always spikes when it is requested.

Drew explained, “Race and police brutality issues played a role in this case, and we were careful to navigate it as best as we could. Our client Michael was a white male Sheriff’s Deputy from Cherokee County and also a SWAT officer. Our jury was overwhelmingly minorities. The defense anticipated that these tensions could play out in the case and—over our objection—crossed Michael on “use of force” reports that they obtained from his file on the eve of trial. They attempted to impeach Michael that his injuries made his job more difficult by showing that he was present with SWAT teams that kicked down doors and that he was able to physically subdue some suspects who would not cooperate with the arrest procedures.

“These efforts mostly fell flat because Michael was able to show that his post-incident SWAT work was done almost exclusively in a supporting role. But the big picture, and likely the only reason the defense team used these things, was to send the message to the jury that our client was the same kind of person as the other law enforcement people who may be negatively viewed in some disadvantaged communities. The jury was certainly fair to our client, but we would be kidding ourselves if we pretended that all of that had no effect on the case.”

Chase added, “Drew makes a good point about this, and it was something we discussed at length ahead of voir dire. While we did object to the “use of force” reports in limine, Judge McBride reserved ruling (and probably rightfully so).  He had shown us that he generally errs on the side of letting evidence in and having the jury sort it out, so rather than wait and let the defense bring it out first on cross, we did talk about them during direct.  Mike was prepared to discuss them and we even tried to use them as a positive, just another opportunity to point out how he tried to go back to work, within his doctor’s restrictions, every chance he got.”

If you would like to learn more about this case, reach out to Drew or Chase. Have questions about trial strategy or need embedded trial counsel? Call Kastorf Law. Thanks to Drew and Chase for filling us in about this case.

And don’t forget to read some other articles from Kastorf Law’s Analysis of a Trial Win series: