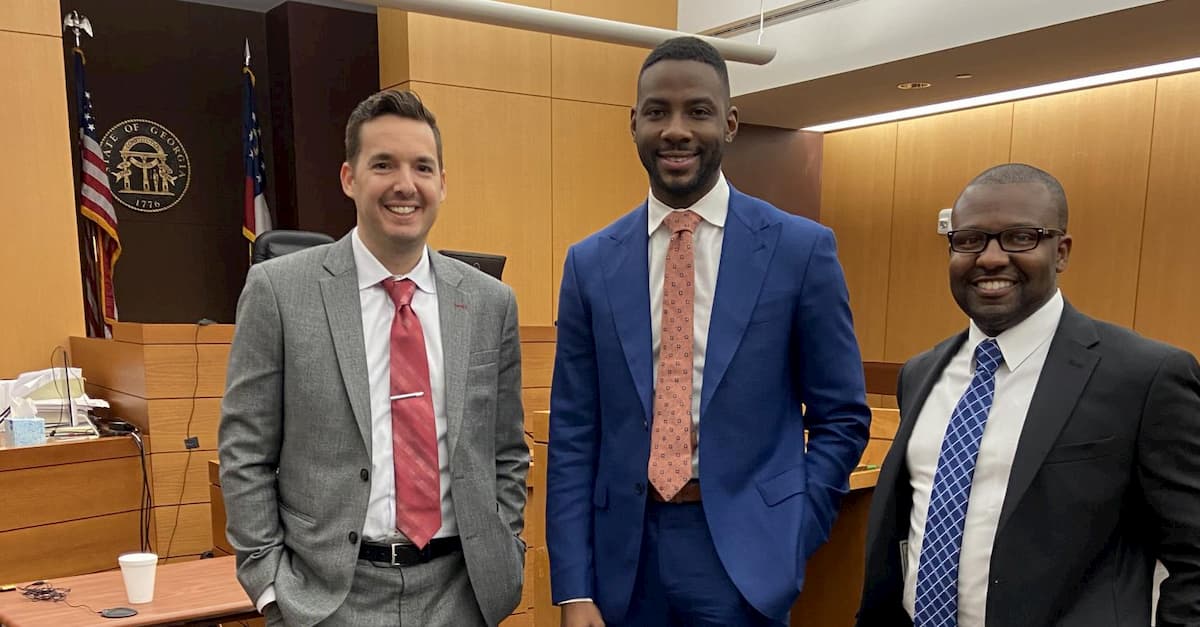 $584,000 in an Armored Truck Wreck in Fulton County, Georgia

Congratulations to Joseph Wilson and Leonard Mathis for obtaining $584,000 in a car accident case involving a collision with an armored money truck. Matt Wetherington also helped out, arguing key motions and evidentiary issues. Kastorf Law spoke with Joseph about what went into his verdict.

What Were the Essential Facts of this Case?

On December 6, 2017, Plaintiff was the passenger in a Chevrolet Impala traveling on Northside Drive towards the intersection of Marietta Street, with the green light. The Defendants were also traveling down Northside Drive headed towards the intersection, but in the opposite direction. Defendants made an improper left turn on a red arrow and slammed into Plaintiff’s vehicle causing her to suffer a butterfly comminuted fracture to her right dominant arm. Plaintiff brought suit in Fulton State Court in front of Judge Richardson. You can read a bit more of the facts from the Daily Report’s coverage.

What Are Some Strategic Takeaways from This Trial?

Joseph Wilson provided his take on what worked and what did not at trial.

According to Joseph, “the biggest reasons we won was that my co counsel and I, Leonard Mathis, took the time to learn our client’s story.  We spent numerous nights with her at her home at dinner. Speaking with her sister, and her other family members about her and what her dreams were.  Because we really took the time to learn her human story, it was very easy for us to tell that to the jury which led us to come up with our theme of ‘she has a caregiver’s heart, but no longer has a caregiver’s future.’ We would have never discovered that without spending a lot of time with her.”

Joseph’s point is a consistent theme Kastorf Law hears when debriefing trial attorneys on great verdicts. While we’ve interviewed a ton of stellar i court attorneys, a nearly universal take is that the sweat equity they put in before trial was the key driving force behind their victories.

Who was opposing counsel, and what was the most effective thing he did?

Opposing counsel were Heather Miller and Andrew Bagley.  “I think they were very effective in appearing contrite on behalf of their clients and that they were there to make things right. They were very careful with their words to make sure to not make it seem like they were attacking Kirche or her credibility at all – although they did in subtle ways. But overall, based on the facts of the case, I think they did it a good job of coming up with the best defense possible.”

Each of the plaintiffs’ counsel Kastorf Law spoke to made a point of praising Heather and Andrew as courteous and professional.

How did the Court conduct voir dire?

Joseph said that the court “allowed us a lot of latitude to conduct voir dire the way we wanted to. This time, we had more of an open discussion, vs spliting up with general and specific questions. This was the first time that I did it this way. While I think we had a much better and open discussion – and frankly the jurors were less bored – however I felt that I wasn’t able to get as many “for cause” strikes as I typically do when voir dire is split up with general and specific questions.”

What were some of the pre-trial evidentiary disputes?

Kastorf Law assisted the plaintiffs in responding to motions in limine. A common theme among Defendants’ motions was that because they were conceding liability, whole swaths of evidence, such as evidence pointing to Defendants’ bad faith, a 911 call, and in-cab footage of the accident, ought be excluded. Defendants also sought to exclude evidence of post accident investigations. Most of the other pre-trial motions were generic topics such as no “golden rule” arguments, but it is often important to push back against such motions, which tend to overstate the actual scope of the relevant evidentiary prohibition.

If you’d like to learn more about this case, check out the Fulton County Daily Report’s coverage. Then reach out to Joseph. And if you need help on motions in limine, or to discuss pre or post trial strategy, call Kastorf Law. Thanks to Joseph for telling us the details of this case.